Reports that made headlines in 2017 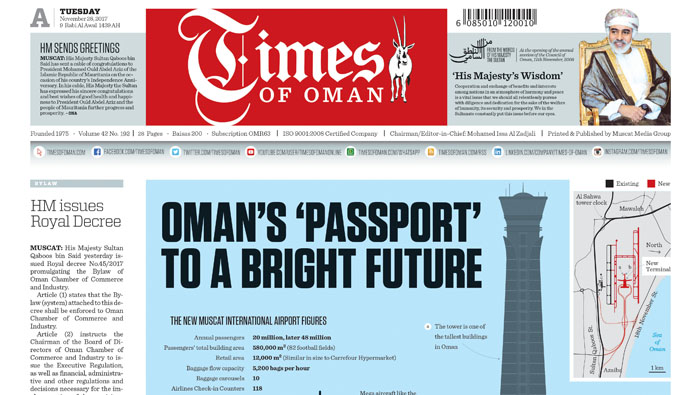 NOVEMBER 28
Oman’s ‘passport’ to a bright futur
With 118 check-in counters, 40 aerial bridges, 149 elevators, close to 5,000 parking spaces, a hotel with 90 rooms and swimming pools, the new, soon to open, Muscat International Airport is Oman’s airfield of dreams. Oman’s Ministry of Transport and Communications has unveiled some of the facts and figures around the single biggest project in the history of the Sultanate. And the sheer logistics of it are breathtaking. The airport project is an integral component of Oman’s attempts to diversify its economy away from oil. Tourism and leisure will become the key planks in the Sultanate’s vision for the future – and a globally renowned airport in the top 20 airports of the world league by 2020 might seem ambitious – but Oman is determined to achieve it. “The building includes 149 elevators of different size and for different purposes. “The northern car park has five levels and accommodates over 1,100 parking lots while the five level southern car parks can accommodate some 1,200 parking,” the ministry told Times of Oman. The external works of the airport project includes 2,054 parking lots with shade and 2,262 parking lots in the open and 406 parking lots for the employees at the airport. There will be 82 counters for Royal Oman Police (ROP), and the new Muscat International Airport will be able to accommodate 20 million passengers annually which can later increase to 48 million passengers.

AUGUST 24
5,000 homes for expats to boost tourism
More than 5,000 new homes will be available for expats to buy across Oman under an ambitious OMR4b tourism drive, officials have revealed. Five Integrated Tourism Complex (ITC) projects are now underway and each of the zones offers hundreds of homes for all nationalities. Currently, non-Omanis can only buy property within ITCs but the government is pushing to create more, as part of its move away from dependence on oil and gas. Tourism and overseas investment are both key to Oman future plans – and the five complexes will together off er more than 5,000 new homes.

SEPTEMBER 24
Everyday heroes: Rescuers save life after two-hour chat
An Indian expat who sparked a massive rescue operation after threatening to jump from a building, had only arrived in Oman seven days before and was said to be depressed because he could not fi nd work, according to his friends and neighbours. A video of the rescue, in which the man jumps into the cradle of a rescue crane and hugs a firefighter, has gone viral on social media after it was released by the Public Authority for Civil Defence and Ambulance (PACDA). A large crowd gathered in the street, in Al Khuwair, to watch as rescuers spent two hours trying to talk the man out of jumping.

NOVEMBER 1
‘Don’t give expats a bad name – respect Oman’
Many migrant workers coming to Oman are forced to pay agents bribes before arriving and work illegally to recover their losses, according to embassy officials. And the Sultanate’s Manpower Ministry has also revealed that tighter controls on illegal workers has meant the black market cost of a visa here is also rising. “As a result of the new procedures, the number of absconding worker complaints has increased and the value of work permits in the black market has also increased to reach OMR3,000, besides a monthly share from the absconding worker,” a manpower ministry spokesman explained.

AUGUST 24
‘Little India’ tourism complex for Duqm
An Integrated Tourism Complex (ITC), planned at a cost of OMR288 million, is to be developed in phases within the Duqm special economic zone. The planned mix-use Integrated Tourism Complex, to be called Little India, will have a wide range of real estate projects, including beach-front villas, apartment units, a five-star hotel, restaurants, a theatre, marina and commercial buildings, said promoters of the project. Those foreigners purchasing apartment units within the ITC will receive residence visas, just as with any other ITC project in the Sultanate. A usufruct
agreement