Reports of 2017 that made an impact 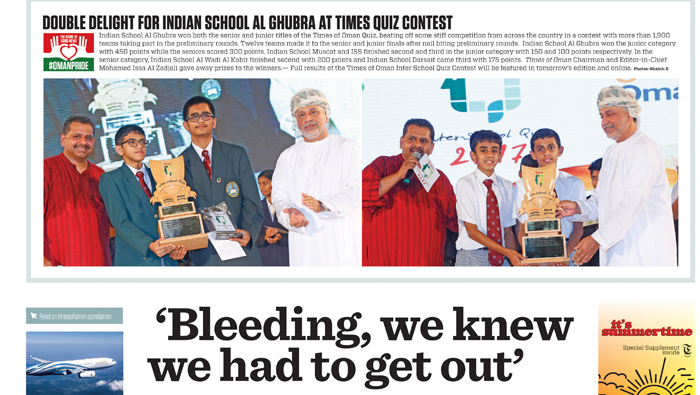 January 18
SPEND YOUR EID SALARY WISELY
Workers who receive salaries early thanks to Eid have been warned to follow a budget as they’ll have to wait for 40 days until their next pay day. The Ministry of Manpower (MoM) has ordered that all private sector employees in Oman be paid by June 20 at the latest, so that people can enjoy Eid celebrations with their families. With paychecks dropping into accounts 10 days early, workers will face a long wait until the next one, prompting advisors to warn that people should follow a budget, and avoid overspending. Sheikh Hilal Al Rashdi, advisor at the Ministry of Endowments and Religious Aff airs said: “My advice to people is they should do proper budgeting and then spend. I have a budget for electricity, water and utilities in general; also for food and other expenses, and so I will not use the budget for electricity until the bill comes. Keep aside some money for your future needs, think of this time of Eid as a state of emergency, where you need more money than usual, but spend some in Eid and keep an amount for family needs later, because you never know.”

APRIL 30
‘Bleeding, we knew we had to get out’
One of the survivors of the bus crash that left two people dead and seven fi ghting for life has spoken of the terrifying moment his coach was in collision
with a heavy truck. Mahiuddin Ahmed, a Bangladeshi working at Indian School Al Ghubra, was travelling from Muscat to Salalah because he needed to meet his sponsor so that he could digitise his passport. As he slept onboard in the early hours of Friday, his bus was in collision with a truck. Both drivers died in the impact, seven people are still fi ghting for life in hospital and 34 suff ered minor injuries. Mahiuddin said: “Lots of us were sleeping and all of us were fl ung to the fl oor because of the impact of the crash. Several of my co-passengers were crying and desperate because the door to the exit had become jammed because of the accident and we could not get out. “Many of us were bleeding profusely, but we knew we had to get out, so we carefully made our way through a hole that been caused by the accident. It was only when I came out of the bus that I realised that I was feeling light-headed, because my left leg was bleeding very badly. I sat down and then I blacked out.

MAY 10
SCHOOLGIRL’S DEATH PROMPTS MEDICS WARNING
When eight-year-old schoolgirl Leeketha Baganna complained to her parents of stomach pain, they thought they could wait a few weeks to have her treated in India during the school holidays. Tragically, they were wrong. Last week, while studying at Indian School Seeb, Leeketha vomited three times and was sent home, still complaining of stomach pain. “She was taken into the fi rst aid room in the school after she was found vomiting. Immediately, we informed her parents and at around 10am, her uncle came and picked her up,” a school offi cial said. At home, her mother, Rajitha, called up her father, Buggaraju Baganna, who was in Nizwa. “After Leeketha’s father arrived, he took her to a private hospital at Al Khoud where she was declared dead on arrival,” her uncle Ram Mudhiraj said. Extensive treatment Her uncle Ram told Times of Oman that her parents had planned to go for extensive treatment for Leeketha in India during the summer holidays, due to start from June 4. “They consulted some doctors here but the cost of her treatment was very high. So they were planning for her treatment in India during summer vacation,” Ram
Mudhiraj said.
Regarding her health, Ram said that she had diffi culty in digesting whatever she used to eat. “That is why she used to eat so little,” he said. The tragedy of the schoolgirl’s death was that her mother – who could only speak her own Indian language Telugu – could not take her daughter to hospital as she had no transport and felt she had no means of communicating with hospital staff . The family and the school authorities are, however, still clueless regarding the cause of her death. “She used to suff er from digestion problems often but we didn’t ever consider that she could die,” Ram said.

JUNE 6
Toddler died after she was left in hot car
A toddler died after she was left in a parked car outside the family home in sweltering summer heat, Royal Oman Police ROP have confi rmed. Abrar Mohammed, 28-monthold, was left inside the family car on Sunday afternoon as temperatures topped 35 degrees in Saham, Oman. Her parents took her to hospital as soon as they discovered her but she was declared dead on arrival, a hospital spokeswoman said. A ROP spokesman has advised parents and family members to exercise caution and not leave their children in cars, especially in extreme summer heat. “On June 4, at approximately 4pm, Saham police station received a call from Saham hospital which explained that a child was taken to the hospital and was dead. Then after search and investigation they noted that the child was left inside the car in Deel Al Abdul Salam in the Wilayat of Saham,” said a spokesman at the ROP. “The main reason for her death was suff ocation, because she was left in the car with closed windows. This was the main reason she died.” He warned parents to be careful when it comes to their children.
, “In the future, parents have to take care, and make sure their child gets out with them from the car. This is the main thing, especially now with summer on, some parents, both citizens and residents, leave their children inside the car or they put the engine on with air conditioning, but it’s still not good if the children are in the car for a long time, either with or without the air conditioning on.

JUNE 15
ID CARD DOESN’T NEED HOME ADDRESS – YET
Residents without an offi cial home address can still renew ID and resident cards by giving their company details, the Royal Oman Police has confi rmed. The force clarifi ed the process after an announcement on Sunday that a home address would be required to renew or apply for the cards in Oman. A police spokesman said: “Expats entering the country who are not yet sure of their permanent address may provide the closest address that they can be reached on, like their sponsor’s address or company address. For those who do not have a personal P.O. Box for their address, that information won’t be necessary.