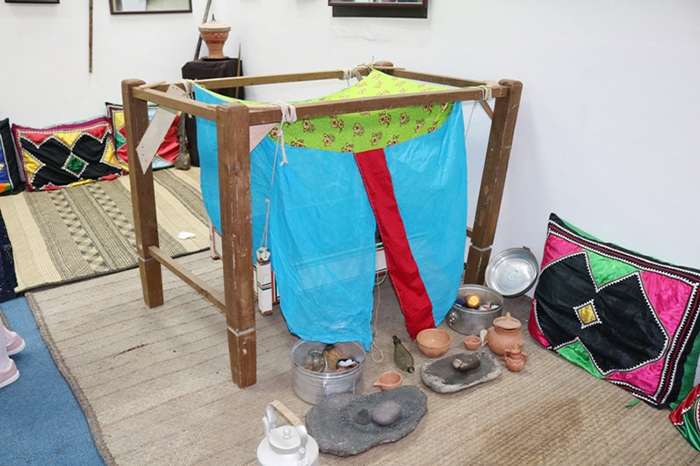 Tafol Ramadan “Um Salim” was fond of collecting antiques since the age of 14. Over the years, this passion has helped Tafol develop a personal museum with thousands of archaeological pieces. The most prominent pieces in the museum are an old sword dating back to the era of Al Yarebah, as well as some potteries that are more than 200 to 300 years old.
“I spent decades searching for rare Omani historical articles, and after years of patience and perseverance, I managed to open a private museum in my house,” said Tafol.
The museum includes thousands of pieces and antiques. Those interested in heritage can visit her home in the state of Taqa in Dhofar Governorate.
“Since the age of 14, I began collecting antiques, coins, tools and other items, as I learnt how to make silverware,” added Tafol.
The museum houses several sections, according to the geographical diversity of the Dhofar area, which depict various heritages, such as urban, Bedouin, rural, agricultural, and coastal. All the sections include crafts made of silver, safflower, pottery, leather, and embroidery that were used in these environments.
**media[783711]**
“In the museum, we were keen to provide all the tools to illustrate details of the old life in Dhofar and display it in an easy and simple manner,” Tafol explained.
For example, in the Department of the Dhofari City House section, there is an old bed decorated with a tent full of embroideries and inscriptions, an old bed for children, a medium-sized carpet made of palm fronds, a box containing old women’s beauty tools and many old boxes to keep manuscripts and letters, as well as men’s clothing that were worn in Dhofar at that time. There were also swords, straps, stilettos, and daggers.
Tafol loved heritage and was keen to possess heritage tools as she was also skilled in making silverware.
**media[783712]**
“Since I was young, I have been producing silverware, and I am now a professional in this field; however, it is rare to find workers practising this craft, so I want to pass on this craft to the future generations by conducting workshops,” Tafol stressed.
As part of her role and keenness to highlight the cultural identity of the Sultanate and to introduce the public to Omani heritage, Tafol has been participating in several exhibitions during festivals in the Sultanate, as well as a number of foreign exhibitions in Qatar, Kuwait, and Yemen.
She has also cooperated with the Ministry of Heritage and Culture and the Ministry of Tourism by collecting many old artefacts and displaying them in Taqa Fort while providing information on them.
Tafol also won the second place in the Sultan Qaboos craftsmanship competition, organised by the General Authority for Craft Industries.