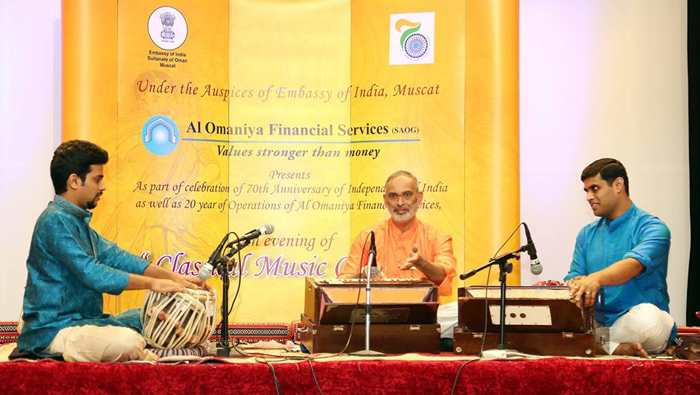 Muscat: An evening of Indian classical music was organised by the Indian Embassy, to mark and celebrate 70 years of Indian independence.
A four-member music troupe from the Academy of Music Belgavi, consisting of renowned singers Prabhakar Shahapurkar, Sarang and Angad Desai and Sudhanshu Kulkarni, presented an array of classical, semi-classical, instrumental and vocal music in Hindi, Kannada and Marathi.
The event was attended by around 300 persons, including dignitaries from Oman, members of the diplomatic community, members of the Indian community and media.
As part of ‘Celebrating India @70,’ the Indian Embassy has been organising a series of events in Oman since August 2017 and will continue to do so throughout the year ending August 2018.
Oman has already witnessed performances of Kathak dance and Rajasthani folk dance during August 2017.
In the coming months, the embassy will organise more dance performances, musical performances, a theatre festival, a quiz competition, a painting exhibition, a painting competition, an essay competition, a seminar and other events.
The Indian Social Club, as well as Indian Schools in Oman have also been organising various events to mark this milestone.