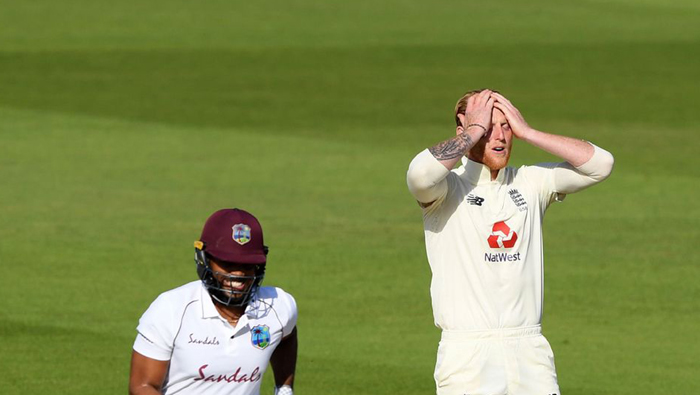 Southampton: England got an early reality check in the series after West Indies put in an all-round performance to go 1-0 up in the series in Southampton.
England and West Indies are dealing with contrasting feelings as they head into the second Test match in Manchester on Thursday. While West Indies last won the first Test of an overseas series against a top nation [excluding Bangladesh, Zimbabwe and Afghanistan] before this 13 years back, England have lost the first Test of each of their last five series.
In a queer way, England are familiar with dealing with losses in the first Test and West Indies are unfamiliar with being the team leading the series going into the second Test.
On the personal front, England have regular skipper Joe Root making a return and one of Zak Crawley or Joe Denly will make way for the middle-order batsman. Crawley's second innings performance in Southampton could see him remain in the starting line-up. Mark Wood could face pressure from veteran Stuart Broad after his listless show in the first Test.
The other possible change is Jack Leach stepping in for the inexperienced Dom Bess. While Bess was good enough in the series opener, he had to counter as many as 10 right-handers in the West Indies line-up. With Leach turning the ball away from right-handers, he might be considered a bigger threat against this West Indies batting unit.
West Indies, on the other hand, appeared well settled with their playing XI. However, they do have concerns surrounding the form of their 2017 hero, Shai Hope. Nkrumah Bonner could be handed a debut if they decide to keep Hope on the bench. They could also bring in Rahkeem Cornwall to give Chase some support in the spin department and
The last series between these sides happened in the West Indies and once again England were playing catch-up after a loss in Bridgetown in the first Test. England went on to lose the second Test in North Sound and conceded the series to the hosts. While they won the dead rubber in Gros Islet, it was pretty clear that West Indies were the better unit in those conditions.
In the series prior to that in 2017 in England, West Indies lost the first Test by a whopping margin only to stun the hosts in the second Test at Headingley. They lost the third Test to concede the series then, but appear to be a well-rounded, better unit this
Ben Stokes, England all-rounder: "I can see why Joe [Root] loses a lot of sleep because he's got to do that every game. I've really enjoyed the responsibility of leading the team and making decisions out there."
Jason Holder, West Indies captain: "It's a massive, massive win. To beat England in England is no easy feat. We were able to do it last time we were here in 2017 so we all know what the feeling is like but things have changed drastically since then. They're a massive unit in their backyard so to start the series this well is very promising for us and we feel proud about the way we performed."