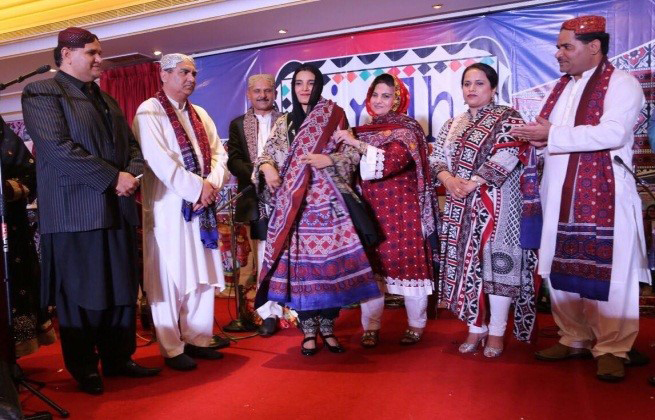 Muscat: More than 500 people attended the Sindh Cultural Festival, which was celebrated for the first time in the Sultanate.
The event was organised by the Pakistani community in Oman, and was a great show in the true spirit of unity, discipline and good faith.
Mrs. Naheed Naveed Atif, deputy head of mission, Islamic Republic of Pakistan to Sultanate of Oman, was the chief guest, along with Mr. Fayyaz Ali Shah and distinguished guests from Pakistan, Mr. Raheel Manjji and Mr. Abdullah Jan Memon, as guests of honors on this occasion.
Officials from the Pakistan Embassy, Chairman and members of Social Club, Chairman and members of PSM Board and a large number of Pakistani community were also present.
The opening ceremony started with a Quranic recitation followed by a translation in the Sindhi language. A dua (prayer) was made by Mr. Aziz Memon for the good health of His Majesty Sultan Qaboose bin Said and strong relationship between Oman and Pakistan.
A film highlighting the ancient part of Sindh history and distinguish culture of Sindh was screened. The video highlighted the combinations of modern Sindh and ancient history as well; including the beauty of deserts in Sindh.
Sindhi and Balochi cultures are very similar to each other because of common historical background and it reflects very closely to Omani culture as well. As we know, culture always brings the nations together. Especially today, this kind of festival will help bring nations closer together and in understanding each other.
The Punjab festival will be organized in May 2017 and the Pakistan festival on August 14, 2017.
In an interview, Pakistani reporter Dr Sharif urged the need of unity and understanding to each other and said it will be possible by conducting similar programmes.
“In the present era of globalization, it is the time to introduce Omani culture in Pakistan as well. It may provide new rout for future diplomacy in favour of both countries,” he said.