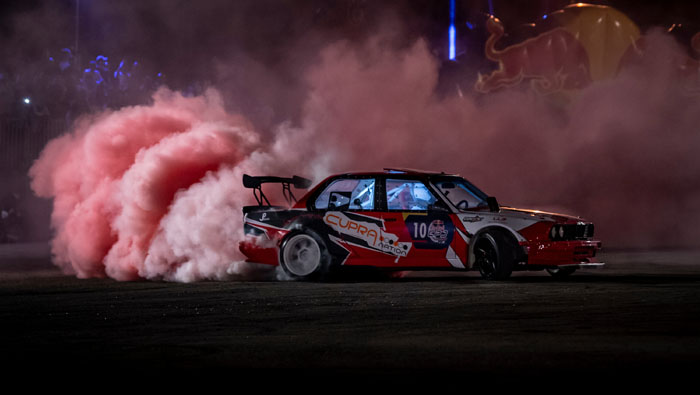 Muscat: If you’re a seasoned Red Bull Car Park Drift fan, then hello! Welcome. If it’s your first time reading about the event, then you too are at the right place, because we’ve got the lowdown on the most exciting motorsport event happening in Oman this week, and you’ll no doubt want to come along for the ride.

What are the rules of Red Bull Car Park Drift?
Drifters must expertly make their way round a challenging course, avoiding obstacles along the way. Each competitor is judged according to a set of nine criteria for a total of 400 points.

A maximum of 120 points is allocated towards drifting skills, while the flipper and pendulum challenges account for up to 60 and 50 points, respectively. Meanwhile, the car’s looks and design make up 40 points, whereas tyre smoke, car sound, the gate and spiral tasks each contribute a maximum of 20 points towards the score. The ‘Box’ 1&2 – a tight enclosure the drifters need to do a ‘doughnut’ in – is worth 50 points.

Drifters lose points if they hit obstacles, drift the wrong way, or spin their car. Three penalties in one round, and it’s disqualification!

History of Drifting
The story of drifting goes way back to the 1960s on winding Japanese mountain roads. A bunch of likeminded racers set out to beat their A to B times by exceeding the grip limit of their tires when taking sharp corners. It didn't do much to help their racing times but instead evolved into an entirely different discipline.

Drifting was born, and by the year 1970 it was featured in the prestigious All Japan Touring Car Championship. Each rider took it further than the last, resulting in some awesome feats redefining driver control. It took 20 years for the international motorsports scene to take on drifting. Countries like the United Kingdom, Australia, New Zealand and the US made drifting a fully-fledged sport.

History of Red Bull Car Park Drift
Lebanon hosted the first ever Red Bull Car Park Drift event in 2008 at the City Mall car park making it possible for all underground drifters to put their skills to test, and placed the spotlight on rally champion Abdo Feghali, making him a drifting legend. The first-ever crowned King of Drift was Michel Feghali.

In 2011 Red Bull Car Park Drift evolved to establish itself as the core developer of drifting in the Middle East and North Africa with 19 qualifiers and 11 participating countries. The number of drift-thirsty fans grew by a five-fold. The Regional Final held at Forum de Beyrouth made KSA national, Said el Mouri, its victor.

Fast forward to the 2016 Regional Finals. Our region’s best drifters went full throttle in Oman. Three Omanis topped the podium. And at only 18 years of age, first time competitor Haitham al Hadidi took home first place after a stellar performance. In 2017, Oman managed to retain the title with Rafaat Al Yahyai who was crowned King of Drift at the Red Bull Car Park Drift Series Final hosted in Kuwait.

2020 Series
All eyes are on Oman as local drifters gear up to prove their skills at the Red Bull Car Park Drift Oman Qualifier, the opening event of the 2020 series. Taking place this Friday 28th of February, the Oman Qualifier will showcase the top 16 drifters in the Sultanate as they battle it out for the title Oman’s ‘King of Drift’.

Oman’s winner will have the chance to represent the Sultanate against the top talent in the region at the Series Final in Cairo in November.

Old favourites will be among the competition at this year’s Oman Qualifier including three-time national winner Refaat Al Yahyai and Haitham Al Hadidi, the youngest ever winner of a Series Final. Al Yahyai took home the crown for Oman at the 2017 Series Final in Kuwait, as did Al Hadidi at the 2016 Series Final on home ground.

With new additions to the series this year, the competition is set to be hotter than ever. Red Bull Car Park Drift is set to grow even greater with this year’s finals. Stay tuned to find out who will be crowned the 2020 King of Drift!