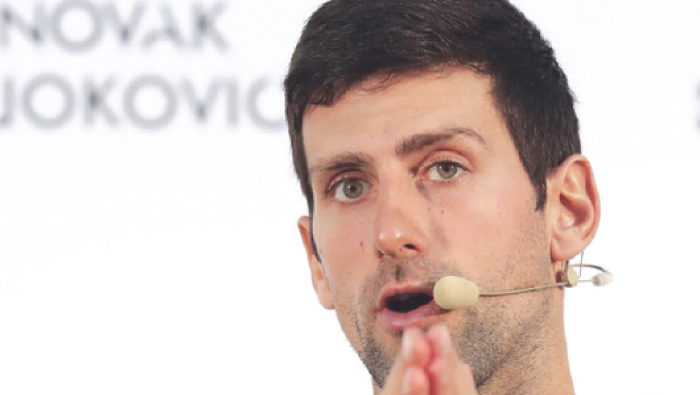 Belgrade: Stressing his Grand Slam and Olympic ambitions, Novak Djokovic, who recently made a comeback as world’s No. 1, said he this season could be his best and feels motivated to race with Roger Federer and Rafael Nadal for the title of the greatest tennis player of all time.
Djokovic, 32, reminded at a press conference at his tennis courts in Belgrade that the ATP Cup title last month with the Serbian national team motivated him to win his 8th title at Australian Open at the beginning of this month, which put him above Nadal at the top ATP rankings.
“Season started for me in the best possible way. I am extremely motivated and inspired to turn it, maybe - into my best season. I am aware that this is the Olympic season. This means that the schedule will be tiresome and full for me and all other top tennis players. There will be less time for relaxation after the Wimbledon,” he said.
“Of course, my goals are to focus on grand slams as always, as well as the Olympic Games. I had the honour to win the bronze medal for Serbia in Beijing in 2008, and I feel that the moment came to win another one. I will give my best to prepare and be at my top level for the Olympics and grand slam tournaments.”
Djokovic said he feels proud and honoured to be able to represent Serbia at the Tokyo 2020 games.
“I will approach the Olympic games like any other tournament because I see this is as the best way to be in a position to fight for one of the medals. On the other hand, I look forward to experiencing what no other tournament can bring - the Olympic atmosphere in the village,” Djokovic said.
Explaining how he managed to keep his calm in the dramatic 3-2 victory against Dominic Thiem (after losing 1-2) in the finals of the Australian Open, Djokovic said that his trick is “to stay in the present moment as much as possible” using his technique of “conscious breathing”.
“In these moments when one’s head is full of emotions and thoughts, the best thing to do is to return to oneself. I close my eyes and try to breathe consciously, relieving my pulse and burden in my head, so I could focus just on the next strike and the next point,” he explained.
He mentioned that his elbow injury in 2017, the surgery in 2018 and his recovery were the hardest period of his life and that he took advice from the famous basketball star Kobe Bryant who lost his life recently in a helicopter crash.
“He shared his experience because in the past several seasons he had many injuries and was considering retiring that season. He told me the history of his experience, and how he needed to balance out his private life and his professional career, to be clear about his goals, and to adapt to the team,” he said adding that Bryant’s legacy is much more than just trophies. Asked about the race between him, Nadal and Federer for the title of the greatest player of all time, which is expected to culminate in the following two years, Djokovic said that he “sees always himself at the throne”.
“Federer’s top performance, in his age deserves every praise. He enjoys while playing, and such talent is rarely seen in the history of the sport. At the same time, I think he still has the highest ambitions when it comes to ATP list ranking and grand slam titles, and I think that the two of us (Djokovic and Nadal) are his biggest motivation to realize his goals. The same goes for me, absolutely,” Djokovic summed up. -Xinhua
“The two of them, our matches and our fights, this is what additionally motivates me. I have been growing up with these guys and shaped them as much as they shaped me. In duels with them over the past 15 years, I grew into this kind of a tennis player,” he concluded.