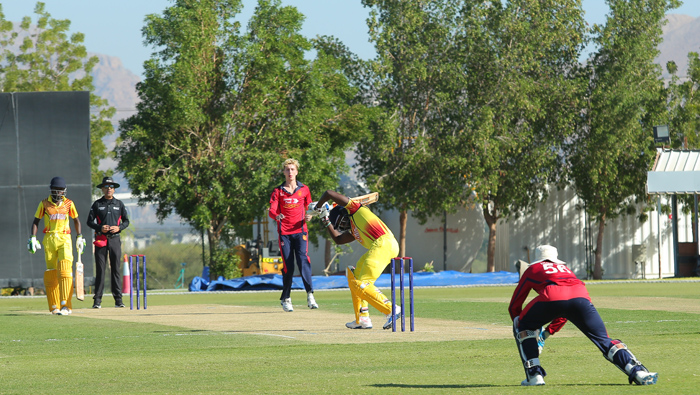 Muscat: Kinchit Shah struck a superb 116 not out in Hong Kong’s remarkable chase of Bermuda’s 291 while Nikolai Smith’s sizzling 102 not out led Italy to an exciting win over Kenya in ICC Cricket World Cup Challenge League B here at Amerat’s picturesque twin grounds on Tuesday.

Earlier, Uganda got the better of Jersey thanks to Dinesh Nakrani’s heroics with the bat and ball in the tournament opener on Monday.

Bermuda batted well to post 291 for 8 on the board in 50 overs, Kamau Leverock and Tre Manders leading the way with solid 63 each followed by a brisk 43 not out from Onias Bascome. Aftab Hussain was the pick of the bowlers, taking 3 for 39 while Kinchit Shah and Waqas Barkat bagged two wickets each.

Reduced to 14 for 2 in the first three overs, Hong Kong found a rock solid Shah leading the fightback, putting together a 94-run third wicket partnership with opener Nizakat Khan who struck a run-a-ball 62. After Khan’s departure, Shah was involved in another major partnership with Waqas Barkat (66), the duo contributing 126 for the fourth wicket as Hong Kong surpassed the target in 47 over, scoring 294 for 7.

In the day’s other game, Nikolai Smith and Michael Ross performed exceptionally in Italy’s win over Kenya. Ross took 4 for 35, playing the lead role in having Kenya dismissed for 210 while Smith struck a scintillating unbeaten century to lead Italy’s successful chase of Kenya’s modest 210. Ross contributed a useful 31 with the bat while Rakibul Hassan scored unbeaten 29.