Warning for families in Oman after toddler found dead in well 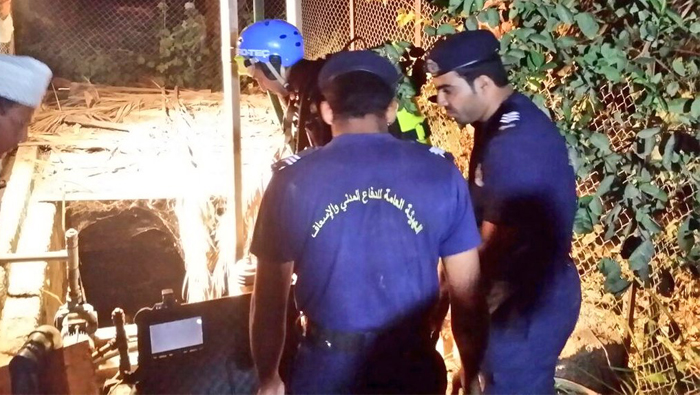 Muscat: A family trip to visit relatives ended in tragedy after a two-year-old Omani boy fell down a well.
Read here: Toddler found dead inside well in Oman
The incident has prompted emergency services to renew warnings to the public to cover wells and to keep young children supervised at all times.
Turki Maazen Al Rahbi had gone with his family to visit his grandmother in the town of Lizugh, 65 kilometres from Muscat.
On the December 5, as little Turki and his friends were playing in the garden next to his grandmother’s home, he fell into an open well, an act his young friends mistook for an evening swim.
Get your essential daily briefing delivered direct to your email inbox with our e-newsletter
The toddler drowned as frantic family members searched the area. The tragedy has prompted renewed warning from emergency services to cover and fence off wells so that children cannot venture near.
“Turki and his friends were playing in the fenced enclosure which houses the well when he fell inside,” said Abdullah Al Nadabi, the Majlis Al Shura member for that governorate. “When his parents asked his friends where he had gone, they told them he’d gone for a swim.
“His parents were obviously concerned and after searching the garden, the well and the surrounding area with the neighbours, placed a call to the Public Authority for Civil Defence and Ambulance at around 5pm last night,” he added.
“The Royal Oman Police arrived at around 6pm that night and stayed till 1:30 am, but had to call off the search because it was too dark.”
According to officials at PACDA, rescue teams scoured the well through the night, but were unable to find Turki, despite the use of cameras. As they resumed the search the next morning with a canine unit, his body was discovered just before 8:30am.
The structure of the well and composition of the soil meant he’d gotten stuck in a pocket of the well, and was, therefore, difficult to find.
Turki was taken by ROP Emergency Medical Teams to the Samail Hospital at around 10am on Tuesday morning, where he was pronounced dead on arrival by doctors on duty.
“Because he had fallen in a specific place and got stuck, it wasn’t evident, neither by eye nor camera,” said Junda Al Balushi, a PACDA officer.
Preventative measures
He advised farm owners to take preventative measures regarding wells and pools.
“It is necessary to secure the wells and cover it along with fencing swimming areas and ensuring that children are supervised at all times and not left alone, to prevent such accidents from happening in the future,” he added.
Turki’s parents were too upset to comment.
“The family is very distraught because of what has happened, and this is a very sad story,” added shura member and neighbour Al Nadabi.
“Parents should always be careful when children are playing outside because it is dangerous in these areas. All they had come for was a nice break with their grandmother and for this to happen is very sad indeed.
“I want to thank the PACDA and ROP authorities for all the dedication they put into this search and want to once again warn people about the dangers of playing in such areas unsupervised.”
Last August, an eight year old boy drowned in a pool while swimming with his friends unsupervised. PACDA statistics show that 113 recorded cases of drowning occurred in 2015, down from 150 in 2014 and 292 in 2013.
Seas, valleys (wadis), water canals, dams, pools, wells, open water reservoirs, ponds, wadis during rainy season are among some of the places where rescue operations had to be carried out.
According to PACDA’s annual statistics, 55 rescue operations were carried out in wadis, 26 in seas, two at pools, two in swamps and 11 at wells, two at dams and seven where waste water had accumulated.