Global field of runners achieve the incredible at Oman by UTMB 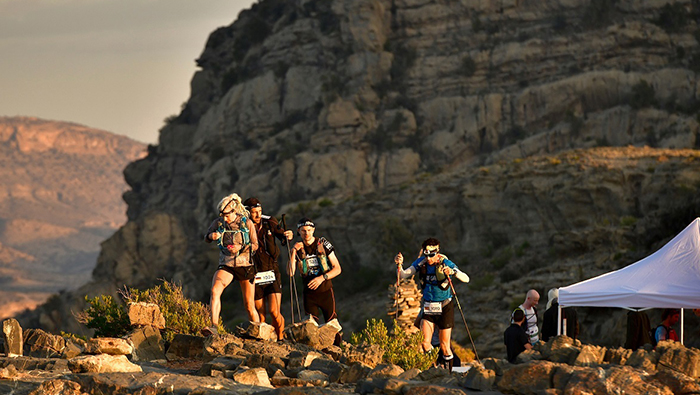 Muscat: The 2019 Oman by UTMB has come to a close in Al Hamra following three days of intense racing through the majestic Al Hajar Mountain range in Oman.
The event has been deemed a huge success, with thousands of people from all over the world achieving the extraordinary in one of the most unique mountain endurance challenges on earth. Almost 2,000 people from 69 countries took part in the event, with ages ranging from just 6 years of age to 87.
The second edition of Oman by UTMB featured six events – four shorter races designed to introduce people to the sport of trail running and three that tested the limits of human endurance: a 170km, 130km, and 50km through the Al Hajar Mountain range.
Starting on Thursday, large fields of elite international and local Omani runners took on the ultra-challenging 170KM and centrepiece 130km courses that took them on a steep ascent of Jebel Akhdar, the Green Mountain, and – in the case of the sold-out 170km race – on to the daunting challenge of the 3,000m high Jebel Shams, one of the highest points on the Arabian peninsula.
Running under clear, starlit skies and hot Arabian sun, the runners, who hailed from 69 countries summited exposed ridges, navigated date palm-filled wadis and abandoned ancient villages, and climbed thousands of metres above sea level.
Crowds gathered at the finish line on Friday in the ancient village of Al Hamra ahead of the first finisher of the 170km. And after an incredible 36 hours, 4 minutes and 29 seconds, Irelands’ Eoin Keith claimed first place, raising his arms in triumph after a race that tested him not just physically, but mentally as well.
Eoin said: “It was so technical, possibly the most technical race I’ve ever done. There was a long 1,000m descent which you normally would expect to make tons of time on but we were so slow. “It makes it easier to keep going mentally because it’s so technical that you need to concentrate pretty much the entire time. There’s no real let-up mentally and it was intense racing all the way. But very enjoyable, Oman is a gorgeous country and the mountains are truly spectacular.”
Two hours, 52 minutes, and 52 seconds later, the crowd were well rewarded for their vigil into the early hours when Omani runner Hamden Al Khatri completed his epic feat of endurance at 0357 local time. Italy’s Francesca Canepa, who won the Ultra-Trail Mont Blanc in 2018, was unbeatable in the women’s 130km, finishing in 26 hours, 11 minutes, and 43 seconds. Olivier Romain led a one, two, three finish for France in the men’s race, with Julien Chorier second and Seb Chaigneau third.
The 50km belonged to the Nepalese runners. Bhim Bahadur Gurung finished in 5 hours, 26 minutes and 22 seconds, 12 minutes and 8 seconds ahead of his nearest competitor, while his compatriots Sunmaya Budha and Mira Rai claimed first and third in the women’s event, finishing in times of 06:12:26 and 6:43:08 respectively. The final day of the event belonged to the future of trail running; 537 people took part in the 10km, 5km, and 2km, with the youngest runner just 6 years old.
OMAN by UTMB is organised by Oman Sail, and CEO David Graham said: “What a fantastic event and congratulations to all those who took part. Inaugural Oman by UTMB set the bar extremely high but I am pleased to say the 2019 edition was bigger and better.
“This year we introduced a number of shorter events and it was wonderful to see the number of people trying trail running for the first time, especially our young runners.
“It was also wonderful to see the number of Omanis who embraced the event. More than half of the nearly 2,000 people who took part were from Oman which shows how well the UTMB brand resonates with this country.”
UTMB Co-founder Michel Polleti, who ran the 170KM in 38:24:07, agreed and added: “When we created OMAN by UTMB with Oman Sail we knew one of the main objectives would be to get Omani people to involved but to have such a result after just one year is great.
“This is a great race and will not only help many people to discover trail running but also for people all over the world the event is helping them discover this incredible country.”
OMAN by UTMB® will return in 2020 with registrations to open in January. Keep an eye on the OMAN by UTMB® website and social channels for dates and further updates.