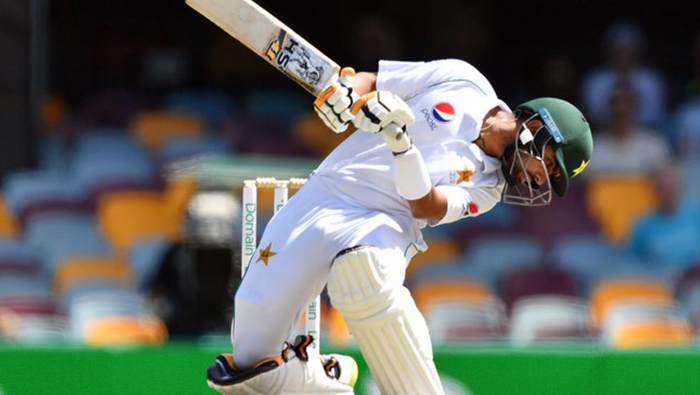 Adelaide Oval: Yasir Shah, Pakistan’s No.8, struck a fiery maiden Test ton to defy Australia's bowlers, but couldn't prevent a follow-on on from being enforced, which further saw them lose three wickets by end of play on day three.
Pakistan ended their first innings on 302, with Yasir the final wicket to fall on 113. Tim Paine sent them to bat soon after, with his quicks reducing them to 39/3, still, 248 runs adrift of Australia's mammoth first innings total. Yasir began the day alongside Babar Azam, with Pakistan six down on 96, and 493 runs away from Australia’s first innings total.
Babar Azam, who looked in fluent touch the previous evening, continued to unleash elegant strokes, racing up to his 12th Test 50 in the fourth over of the day.
With Babar looking good from one end, Yasir did a commendable job defying Australia’s bowlers, despite being drawn forward by their quicks and getting a few outside edges in the process. One such edge fell just short of Steve Smith, in the slips, with Yasir on 26.
On 33, he had another close shave, when a Marnus Labuschagne delivery caught the outside of his edge and fell just short of Smith’s fingertips, confirmed only by television replays. Babar continued to look steady, creaming Labuschagne’s leg-spin for back-to-back fours to move into the 90s.
On 43, Yasir had another reprieve, when Labuschagne spilled a straightforward caught-and-bowled chance. By the end of the 65th over, the duo had staged a commendable recovery, with 200 right insight, and a 104-run stand in their kitty.
Mitchell Starc switched ends and reaped instant benefits: he first extracted Babar to pick up another five-for, courtesy a one-handed stunner from Paine, and then got rid of Shaheen Afridi, catching him plumb in front of the stumps.
Yasir continued his tenacious charge from the other end, using his feet against Lyon to target cow corner; Mohammad Abbas also grew in confidence as he went about forging a crucial stand worth 87 with Yasir, who closed in on his maiden Test ton even as the new ball was taken.
The three-figure mark came with a half-hearted lob that just fell behind mid-on, but it didn’t matter for Yasir, who changed ends and broke into a zealous celebration. He was the last wicket to fall, holing out into the deep off Lyon, a bowler he had targeted through his knock. Australia’s bowlers did not concede a single extra until the 83rd over, but their fielders regularly failed to latch onto half-chances, Labuschagne later dropping another sitter at short-leg. Pakistan’s second innings started amid frequent rain breaks, but carried much of the same template from their previous gigs; Imam-ul-Haq, playing his first Test since January, succumbed to a nine-ball duck.
Azhar Ali was sent back off a brilliant diving catch by Steve Smith in the slips, off Starc, who picked his seventh wicket of the game. Babar Azam did manage an eye-pleasing on-drive but was also nabbed early, pushing outside off to a Hazlewood delivery that carried a healthy edge to the keeper. Early stumps were called, owing to continuous rain that could allow just over 76 overs in the day's play.