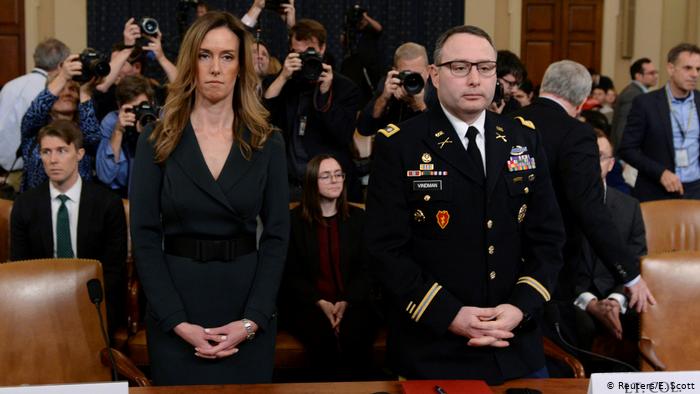 Two top national security aides testified on Tuesday during the ongoing impeachment investigation into US President Donald Trump's alleged abuse of his power to gather damaging information on political rivals.
Both Lt. Col. Alexander Vindman, an Army officer at the National Security Council, and Jennifer Williams, his counterpart at Vice President Mike Pence's office, listened to the July 25 call between Trump and Ukrainian President Volodymyr Zelenskiy, and said they were alarmed by it.
Vindman, a decorated 20-year army veteran, testified to his certainty that Trump was using the military aid the US sends to Ukraine to ward off Russian aggression, as well as a White House visit sought by Zelenskiy, as political tools.
These were allegedly used to bribe the Ukrainian leader to either find or invent dirt on Hunter Biden, the son of the former vice president and current Democratic presidential candidate Joe Biden.
The younger Biden had been on the board of Burisma, a Ukrainian oil firm.
Kurt Volker, a former US special envoy to Ukraine who also testified during the 11.5-hour hearing, said that allegations of corruption involving Biden and his son were "not credible," rejecting "conspiracy theories" embraced by Trump and some of his allies. Volker said he has known Biden as an honorable man for more than two decades.
'There was no ambiguity'
"I did not think it was proper to demand that a foreign government investigate a US citizen,'' said Vindman. He added that there was "no doubt" about what Trump was asking Zelenskiy for.
"The Ukrainians would have to deliver an investigation into the Bidens," he said. "There was no ambiguity."
According to US media, the army has stepped up protective measures for Vindman and his family and are considering relocating him to an army base, citing concerns for his safety after President Trump and Republican leaders have verbally attacked the witness.
Vindman has called the attack on his character, particularly those questioning his patriotism, "reprehensible" as well as "callow and cowardly."
Two other senior White House aids, Jennifer Williams and Tim Morrison, also said during the hearings that they were concerned with the political nature of the phone call.
Williams, a career foreign service officer, testified that she found the July call "unusual" since the president discussed "a domestic political matter" with a foreign leader.
Meanwhile, Morrison, who has left the administration since the Trump call, worried its disclosure would not play well in Washington and reported it to the National Security Council's top lawyer.
How is impeachment playing out with Trump?
Trump and his allies have dismissed the impeachment inquiry as a desperate attempt by Democrats to oust him from power.
The investigation has highlighted not only the call to Zelenskiy, which was first reported to authorities by an unknown whistleblower, but also the questionable dismissal of a US ambassador to Kyiv. Former Ambassador Marie Yovanovitch reportedly stymied Trump's attempts to have a Ukrainian investigation into the Bidens launched and also ran afoul of the president's former lawyer, Rudy Giuliani.
While she was giving testimony last week, Trump insulted Yovanovitch in real time on Twitter, leading to concerns that his actions amounted to illegal witness intimidation.