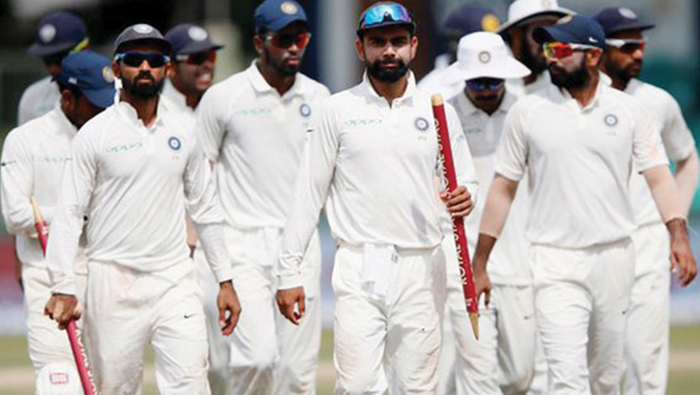 Indore: Bangladesh managed to better their first innings score by 63 runs on day three of the first Test in Indore, but it wasn’t enough to stop India from registering their sixth straight win in the ICC World Test Championship.
For quite some time, Mushfiqur Rahim (64), first alongside Liton Das (35), and then with Mehidy Hasan (38), threatened to take the game into the fourth day with some strong resistance.
However, the hosts, led by Mohammed Shami’s 4/31, wrapped up Bangladesh’s second innings for 213 in the final session of play, and with it, registered a comfortable win, by an innings and 130 runs, to take an unassailable 1-0 lead in the two-match series.
India declared at their overnight score of 493/6, leaving Bangladesh needing a minimum of 343 runs to make the hosts bat again. Their start in the second outing wasn’t much different to that in the first, as India’s new-ball pair of Ishant Sharma and Umesh Yadav removed the openers Shadman Islam and Imrul Kayes within the first seven overs.
Five overs later Shami, India’s go-to man in the second innings, struck twice in quick succession to reduce the visitors to 44/4. He first had the Bangladesh skipper Mominul Haque caught in the crease while bowling from around the wicket, but was denied a leg-before call by the on-field umpire Rod Tucker, before India had it reviewed successfully. In his next over, he got one to hurry on to Mohammad Mithun, who hit it straight to Mayank Agarwal at short mid-wicket on 18.
Post-lunch, Shami had Mahmudullah caught at third slip by Rohit Sharma, who had earlier shelled one off the same bowler but held on to a sharp chance on this occasion. Liton Das then began his brief counter-attack, and with Mushfiqur solid at the other end, Bangladesh started to look good with the bat for the first time in the Test. Das hit six boundaries during his 39-ball stay, before hitting one straight to Ashwin, not long after the drinks interval.
Mushfiqur then found support in Mehidy Hasan and reached his 20th Test fifty, before Umesh removed the latter in the first over post-tea.