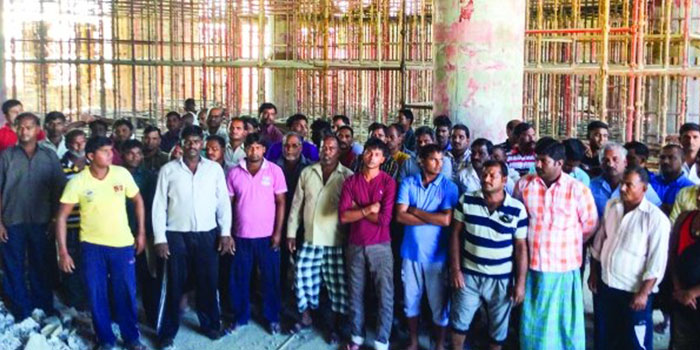 Muscat: Around 400 expatriate workers who downed tools after the company failed to pay their salaries for five months have resumed work after bosses paid some of the outstanding wages.
“Last week, we got two months’ salary in our bank accounts and the company officials have assured that they will clear the pending salaries by December. We trust them and are hopeful,” a company worker from Sohar camp said.
The workers had downed their tools for one week as a sign of protest. “We had to do so because the company was simply giving us hollow assurances. They were changing dates. Some of the workers’ cards had expired too. The company is saying that after clearing the dues, they will repatriate us,” a worker added.
“We had not remitted money for the last five months. Families back home were struggling a lot. So, as soon as we got the money, we remitted it,” he added.
Last week, the executive president of the Central Bank of Oman had said that most of the outstanding dues of contracting firms have been paid by the government.
“Maybe there are some outstanding amounts. So, we have told the banks to be little flexible on their payments to their clients/main contractors/sub-contractors. And we have allowed them to give some sort of grace period for these accounts,” Hamoud Sangour Al Zadjali, executive president of the Central Bank of Oman (CBO), said.
He also said that the central bank has also brought in new regulations and directives to ensure a healthy credit growth in a move to support the private sector.
Oman’s budget deficit for the first eight months of 2016 surged ahead by 63 per cent to OMR4,371.6 million, as plunging crude oil export revenues started affecting the government’s fiscal balance. This is against a projected deficit of OMR3.3 billion for the entire 2016 and a deficit of OMR2,681.6 million for January-August period of 2015.
Recently, the Chief Executive Officer (CEO) of an Omani contractors association had told Times of Oman that Oman is facing a construction crisis.
Shahswar G Al Balushi, CEO of the Oman Society of Contractors, said difficult conditions will persist in the construction sector until oil prices — and therefore the economy — recover.
“Due to the oil price dip, there are no new projects coming up in Oman. In addition to that, companies carrying out existing projects are facing big trouble with cash inflows, which will eventually lead to salary delays and other issues.
Article 51 of the Oman Labour Law states that employees, who receive their salaries on a monthly basis, should be paid once a month at least.