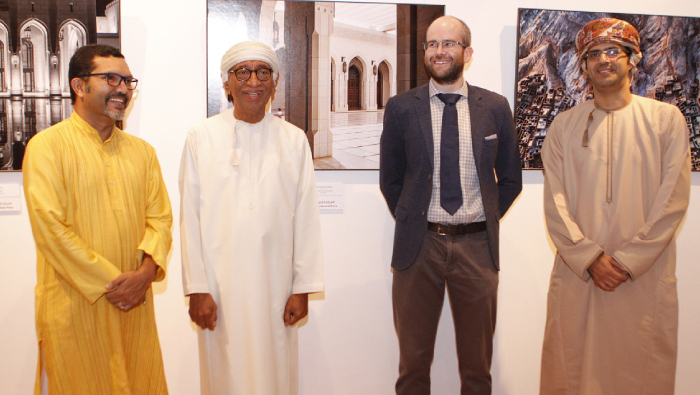 Muscat: The Al Zubair Photography Award honoured the winners of one of the highest awarding photography competitions in the region at Bait Al Zubair on Monday.
Ahmed Al Toqi won the first prize, Ian White claimed the second prize and Sanjoy Sengupta the third prize for their photographs of Omani architecture.
Speaking on the occasion, Mohammad Al Farei, CEO of Bait Al Zubair, said, “Oman has been able to highlight its talents in the art of photography over the past decade both locally and internationally. The award has been able to bring forth the talents that have been cultivated locally over the years, and unearth them through this exciting award. It is an honour to recognise the work of the photographers and highlight the many facets and intricacies hidden in the beauty of Omani architecture.”
Al Toqi was awarded the grand prize of OMR4,000 for a photograph titled ‘Harat Al Ramil,’ White took away the second prize of OMR2,000 for his image of the Sultan Qaboos Grand Mosque, and Sengupta the third prize of OMR1,000 for the image titled ‘Reflection’ of the Royal Opera House Muscat.
The biennial photography award explores a different theme every two years, with Omani architecture being the theme of the first edition.
Al Farei added, “Our objective was to inspire photographers to explore Oman’s architecture, feel enlightened by the beauty surrounding them, document it and share it with the world. I’m happy to say that we were successful in achieving this based on the high quality and artfulness of the submissions.
“It was a challenge to select the final winners based on the high caliber of the photographs we received, but we are confident and delighted by the winners and all the photographic work of Oman that has been shared for the award.”
The competition saw a large number of submissions, with over 1,600 registrations from over 40 different nationalities. Over 65 percent of the submissions received were from Omani photographers. Submissions highlighted the many facets and intricacies of historical, traditional and contemporary Omani landmarks, such as images of forts, mosques, homes, traditional buildings.
Commenting on his photograph, first prize winner, Al Toqi, said, “I am really proud to win the first prize of the Al Zubair Photography Award in the especially challenging theme of architecture photography. I selected a unique aerial shot of the Al Rami neighborhood in Bahla. What makes the neighborhoodspecial is the number of homes at a close proximity to one another each other and narrow alleys running through them situated on the slopes of the mountain.”
Al Toqi continued, “I would like to thank Bait Al Zubair and HE Mohammad Al Zubair for supporting the arts and culture in Oman, especially the craft of photography through the Al Zubair Photography Award, which is the largest Award of its kind in the country.”
The competition was judged by prominent Omani architect and Chairman of Omantel and Al Mouj, Eng. Sultan bin Hamdoon Al Harthi, with leading international photographers Victor Romero, Catalin Marin, Henry Dallal and Khamis Al Moharbi.
The award function was led by Mohammad Al Zubair, whose professional photography has earned him numerous awards and several published photobooks dedicated to capturing the beauty and architecture of Oman.
The Al Zubair Photography Award was open to professional and amateur photographers over the age of 18. Photographs needed to be of a high resolution and taken after 01 January 2015.
Only one photograph, with no prior competition participation, could be submitted. Information on the award are shared on the official website, www.alzubairphotography.com, and the social media channels.