17 killed in Mwasalat crash in Dubai 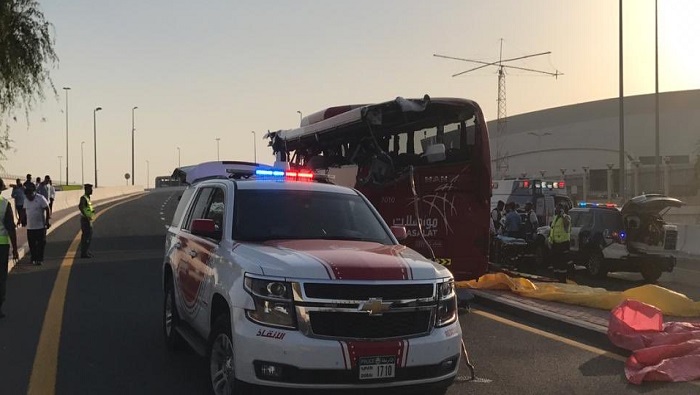 Muscat: 17 people have been killed and five more are in critical conditions after a Mwasalat bus crashed in Dubai.


Following the accident, Mwasalat has suspended all trips between Dubai and Muscat until further notice.

Early statement
A statement by the company read: "A company bus number EO5 on the route 201 towards Dubai has unfortunately been involved in a fatal car crash in the Emarat, which resulted in 15 fatalities and five more being left in crititcal condition."


"The company will suspend all trips on the Muscat-Dubai route until further notice starting from today and until further notice, after coordinating with the road and transportation authority in Dubai, and we apologize for any inconvenience this may cause," the statement added.


A statement by Dubai Police read: "At 5:40 this evening, a car crash occured involving a Mwasalat bus with 31 people on board, with Omani plate numbers, along Sheikh Mohammed Bin Zayed Road, specifically at the Rashidiya exit to the metro station, which resulted in 15 people from different nationalities being killed, as well as 5 being injured greviously.


"This occured after the tour bus collided with a guiding sign at the exit. The dead and injured have been moved to the relevant authorities, and investigations are ongoing to discover the reasons for the unfortunate accident."

"The company would like to offer its sincere condolences to the families of those who have lost their lives, and we ask the lord to heal those who are injuried," Mwasalat added.


Mwasalat is investigating the incident while coordinating with authorities in Dubai, following the accident which took place at 6 PM today.


"As soon as the company heard the news, the company has worked on following up on details with the concerned authorities in Dubai to discover the details and causes of the accident," according to the statement.