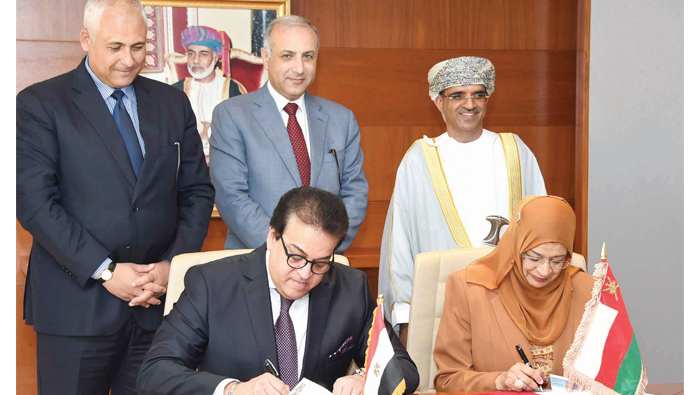 Muscat: The Sultanate and Egypt signed at the Ministry of Higher Education yesterday an executive programme for cooperation in the field of higher education for the 2018 to 2020 period.
The programme was signed on behalf of the Sultanate’s government by Dr. Rawya bint Saud Al Busaidiyah, Minister of Higher Education, while it was signed from the Egyptian side by Dr. Khalid Abdel Ghaffar, Minister of Higher Education and Scientific Research in the Arab Republic
of Egypt.
The pact was signed when Dr. Al Busaidiyah received in her office the Egyptian minister and his accompanying delegation.
The two sides held a session of talks during which they discussed means of cooperation and coordination in matters of common concern.
The session touched on several topics, such as the recognition of some higher education institutions in the Sultanate by the Ministry of Higher Education and Scientific Research in Egypt, as well as benefiting from the Egyptian experiences in conducting research surveys related to the higher education.
The session also touched on means of enhancing the exchange of scholarships between the two countries and encouraging cooperation in the fields of scientific research.