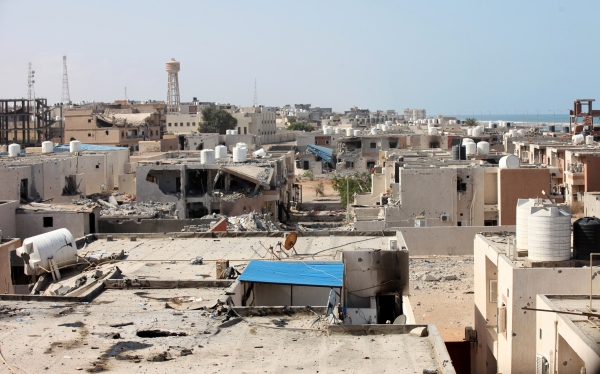 The Netherlands’ invitation last week to Libya’s UN-installed Government of National Accord (GNA) Prime Minister Fayez Serraj to visit Holland was more than about sticking your finger in a dyke.
On the surface, Serraj’s meeting with Dutch Prime Minister Mark Rutte to discuss political support, and an offer to train Libya’s coast guard to intercept migrants, was a shot in the arm for the GNA, a government that has yet to get a grip on militia-strewn Tripoli, never mind the rest of the country. More than a year after arriving in Tripoli the GNA has become a one-man show, a “government” in name only, with no army of its own and no control of the country it was installed to unify.
But I believe there is another larger game afoot: Serraj is seeking support with Netherlands regarding Libya’s future on two counts: First, to smooth the path for Royal Dutch Shell to return to a country it pulled out of five years ago as fighting worsened. Oil production in Libya is zooming up, even as the war continues, hovering at a million barrels a day, and Shell want in.
Second is the question of Saif Al Islam Gaddafi, son of Libya’s former leader Muammar, who was freed from custody last month by the town of Zintan, where he had been held in custody since 2011. Saif Al Islam is indicted for crimes against humanity by the International Criminal Court which is also based in the Dutch capital, The Hague. After his release ICC Prosecutor, Fatou Bensouda, stated: “Libya is obliged to immediately arrest and surrender (Saif Al Islam) to the ICC, regardless of any purported amnesty law in Libya.”
Serraj’s problem is that he is in no position to hand Saif Al Islam over to the Hague. The GNA has no authority outside Tripoli, and the only authority inside the capital depends on those militias who, day to day, decide to back Al Serraj. Zintan, south west of Tripoli, is aligned with the GNA’s rival, the House of Representatives (HOR) Parliament in eastern Libya, and its powerful army commander Field Marshall Khalifa Haftar. And this parliament has granted Saif al Islam an amnesty.
That gives Saif Al Islam freedom of movement over approximately three quarters of Libya which is secured by Field Marshall Haftar’s Libya National Army. Not only that, but a new political role beckons for Saif Al Islam, of pouring balm on tensions between different forces in the country, some of whom backed his father, some of whom opposed him, in the 2011 revolution.
Saif Al Islam has called for a Truth and Reconciliation commission to meet that end, offering the chance for Libya’s factions to end the cycle of violence.
His supporters say there is no evidence showing he orchestrated crimes the ICC accuses him of, and that this would be exposed in any Hague trial. Surrendering to The Hague would, however, mean a long trial, and extended time in detention, time he would prefer to use to find a political role in Libya.
Serraj and his UN backers seem to want the opposite, seeing a long trial, whatever the result, as taking him out of circulation from Libya’s political ferment. I believe this is because they sense that Saif-al-Islam’s amnesty by the HOR will see parliament, not the GNA, benefit if he is allowed full freedom of action.
The last piece of this puzzle involves energy. Shell’s interests in Libya were attacked repeatedly by various belligerents during the country’s 2011 revolution and subsequently the company pulled out of Libya. Libyan oil production is rising not because of the GNA, but because of parliament, and the LNA, which has captured most of the country’s oil industry from militias that had been demanding payments for letting the oil flow.
For the moment Saif Al Islam’s situation is deadlocked. The ICC chief prosecutor couldn’t drop her charges even if she wanted to, only the UN Security Council can cancel a prosecution. Equally, Serraj, with or without Dutch support, cannot hope to catch Saif Al Islam. More than a decade ago, Dutch commandos joined American, British and French units swooping on war criminals in Bosnia, snatching them to face trial at The Hague, but the Netherlands may hesitate before using special force for what would be a far more difficult, controversial and probably bloody extraction attempt.
I believe a more enlightened policy by Holland, and the UN, would be to invite Saif Al Islam to show what he can do; get going on a reconciliation process and help deliver the thing Libyans of all sides want most desperately, which is peace. For Libya’s sake, the chance should be taken.